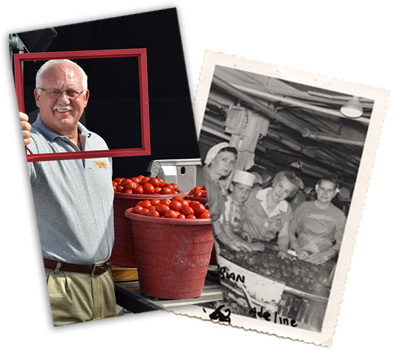 When retired canner Grover Hutcherson bought and restored the fire-damaged Orestes Packing Company in 1940, little did he know that this would be the start to an iconic Indiana business.

In 1948, Frances (“Fran”) and her husband, Ernie Reichart, assumed management of the company, purchasing the Red Gold label in 1970. From that point on, their products took the Red Gold name. The company also added ketchup and tomato juice to the product line-up.

Fran and Ernie’s children joined the business starting in the 1970s. In 1980, their son Brian became CEO of the company, and in the early 1990s, after a half-century of prosperous business, Ernie and Fran Reichart officially turned management of Red Gold Inc. over to their children.

Today, the Reicharts are more involved than ever in the company, with the fourth generation joining the company over the last several years. There are now four family members working at Red Gold on a daily basis.